“Nothing about us without us” is a phrase I hear often as a member of a Reconciling United Methodist Church. LGBTQ people use this phrase to assert that conversations about LGBTQ inclusion should center and amplify the voices of LGBTQ people, rather than allowing non-LGBTQ people to make decisions that affect our community without us. But I wonder often whether my LGBTQ family realizes that when they use this phrase, they are borrowing the language from another minority group that still struggles to be heard: the disabled community.

Disability activists first used this phrase in its English form1 during a decades-long battle from the time of the Civil Rights movement up until the 1990s for legislation against discrimination in employment and education on the basis of disability. That battle led to the passage of the Americans with Disabilities Act (ADA).

Thirty-one years after the ADA’s passage, many disabled people are still left out of discussions regarding their lives, and this could not be truer of neurodivergent individuals, which include the Autistic, ADD, and Dyslexic communities, among others. Indeed, the Autistic community has so frequently been talked over by the medical community and larger world that the Autistic Self-Advocacy Network (ASAN) has adopted “nothing about us without us” as its motto.

I am a Reconciling United Methodist who exists under the double rainbow of being queer and neurodivergent. I am diagnosed as having ADD, and am likely also an Autistic person who has not received a medical diagnosis as such2. At that intersection, I experience an otherness in the world and the Church, doubly longing to be accepted and celebrated for all of who I am and doubly lamenting that many will not accept me for either my romantic orientation or my neurotype.

My neurodivergence is a part of me as much as my queerness is: something that I celebrate as a beautiful gift from God that makes me unique, and a testament to the diversity of how human brains can be structured. Yet I long for my Church to be more just toward neurodivergent people and to stand behind us as we seek justice for ourselves in the world.

If the Church is to truly love and affirm each individual, it should also celebrate the diversity in human neurotypes and affirm those whose neurotypes are non-typical. As the Reconciling movement benefits from the language, scholarship, activism, and allyship of the disabled community, I call on it to intentionally make space for, listen to, and respect its Autistic and otherwise-neurodivergent members in every part of the Church community, up to its leadership.

LGBTQ people share many of the societal obstacles to acceptance, safety, and economic stability that disabled people face. Neurodivergent people participate in, and are essential to, the work of every piece of the Reconciling community. They are also just as likely to be LGBTQ-identified as the majority of the human population. Yet the LGBTQ community is largely unaware of its kinship with the neurodivergent community in its struggle for acceptance and control of its own narrative. While LGBTQ people slowly gain affirmation, neurodivergent voices, especially Autistic ones, are still heavily stigmatized and silenced. This community that shares so much of the same oppressive weight of white ableist heteropatriarchy with the LGBTQ community, and has lent so much of its own voice to LGBTQ liberation, needs and deserves the support of its LGBTQ siblings in its own liberation.

To be neurodivergent means to experience first-hand the broad societal rejection known by so many LGBTQ people in our families, places of employment, and churches. That rejection is compounded for many neurodivergent people who are also LGBTQ. Our common experiences create the opportunity for a natural allyship between our two communities, if only the LGBTQ community were more aware and accepting of its neurodivergent siblings.

Among the parallels that both neurodivergent and LGBTQ communities experience is the tendency for others to speak about us rather than listen to us. Non-LGBTQ people have characterized LGBTQ people as immoral, criminal, or disordered based on little acquaintance with actual queer people.

Similarly, neurodivergent people are regularly maligned and talked over. This is especially true for the Autistic community, of whom harmful stereotypes and ideas are abundant. The loudest voices that talk about Autistic people are usually non-Autistic people. This is not for lack of a vocal Autistic community trying to be heard. Rather, Autistic voices are outcompeted by wealthy organizations that, combined with well-meaning medical staff and parents, speak over the majority of Autistic voices asking for different language labels, different symbolic representation, and an end to harmful medical practices.

One of the sadder experiences shared by both communities is that of being pathologized and subjected to harmful treatments by the medical community. The LGBTQ community knows the harm done by conversion therapy by its many different names. Members of the Autistic community still experience some of the same treatments that have been debunked and even outlawed in some places for use on LGBTQ people3. In fact, the original developer of the anti-Autistic “therapy” Applied Behavior Analysis (ABA) was also the developer of a type of anti-gay conversion therapy. His name was Ivar Lovaas. The PTSD observed in children subjected to ABA is also similar to that seen in survivors of anti-gay conversion therapy. ABA is still widely accepted by the medical community despite efforts by Autistic activists and allies to end the practice.

Even when neurodivergent people are not directly harmed by misguided medical practice, we are still commonly excluded from employment and social support networks – a challenge known well by our LGBTQ siblings.

Discrimination in the Church

If you live in the U.S. and there are more than 45 adults in your church, there is likely at least one Autistic adult there. This is based on numbers from the Centers for Disease Control in 2020, which estimated how common Autistic people are in the adult population of the United States.

Unfortunately, Autistic people are less represented in church leadership because our sensory needs and communication styles tend to lead neurotypical church leaders to assume that we are not competent for leadership roles. This leads neurotypical church leaders to exclude Autistic people from lay leadership all the way up to clergy certification and placement. The pain of exclusion from full participation in spiritual community is one that Reconciling neurodivergent people know on a deep level. We join our LGBTQ siblings in repeatedly calling for those discriminatory barriers to end.

But Isn’t Autism a Disorder?

Autism is a disability in most contexts, but disability is simply a social construction in which attitudes, systems, and communication barriers pose challenges for a person with specific traits to achieve their desired functionality in their context. This way of interpreting disability is reflected in what’s known as the social model of disability, which focuses on the societal role of systemically disabling individuals and the need for society to change itself. That contrasts sharply with the medical model, which focuses on the individual’s need to change themselves in order to conform to society.

As my LGBTQ family in the Church borrows the language and advocacy of the disabled community, I call on it to make room for and elevate the voices of my neurodivergent family by centering our voices in conversations about us, respecting our language choices, squashing hatred against us, and ensuring that we are fully included in the Church. The intersections of queerness and neurodivergence run too deep to be ignored, and the two communities share so much of our struggles, language, and membership. As children of God seeking the Kin-dom together in love, we must support each other in liberation.

How the Reconciling Movement Can Practice Better Allyship to Neurodivergent People

As an LGBTQ United Methodist, I give thanks for the Reconciling movement and its insistence on centering the narrative about LGBTQ people on LGBTQ voices. This approach provides a framework that Reconciling United Methodists can easily apply to becoming better allies to our neurodivergent siblings. The key elements of neurotypical allyship are similar to allyship techniques with which Reconciling Methodists are already familiar:

If someone claims to have information about autism to impart, including a parent of an Autistic child or a medical professional, find out if actual Autistic people agree. Try hashtags like #actuallyautistic or #askingautistics, or check out resources produced by the Autistic Self Advocacy Network (ASAN) or the Autistic Women and Nonbinary Network (AWN).

Sharing and amplifying what we say is even better. Additionally, j     ust as you should respect each person’s opinion but wouldn’t take the opinion of a single member of another minority group as a reason to discount the preferences of the majority of that community, a single Autistic person’s opinion is not a valid reason to negate the wishes of the majority of the Autistic community.

While I believe that the insistence of many neurotypical people on using language such as “person with Autism” and “on the spectrum” to describe us is well-meaning, the majority of the community by any survey one might find have expressed a desire to be referred to as a group as “Autistic.”

When neurotypical people insist on labeling us with other language, it ignores our right to choose the labels we want for ourselves and contributes to the pathologizing of Autistic people.

For LGBTQ people, using our chosen names and pronouns shows respect for our knowledge of our own lives. To use other names or pronouns is harmful. It is similarly harmful to neurodivergent people when neurotypical people insist on describing us in ways that we have not chosen. While some individuals do prefer to be referred to as “people with autism,” and you should ask each person what they prefer, you should generally use “Autistic” for groups or the community, as that is the preference of the majority.

Include us in all parts of church life, including leadership.

Hate groups are sadly common. I could write a whole blog post about the harm perpetuated by organizations like Autism Speaks and the symbols associated with them (such as the puzzle piece and “Light It Up Blue.”) These symbols may seem innocuous, but they represent a long history of neurotypical people labeling and pathologizing autism while ignoring the needs, wishes, autonomy, and dignity of Autistic people.

Instead, educate yourself with Autistic-written resources such as the ones mentioned above. If you want to use symbols of support for neurodivergent people, use those chosen by the neurodivergent and Autistic communities to promote acceptance, such as the rainbow infinity sign, “red instead,” and “light it up gold.”

1 The disability activist community likely adopted the term from similar mantras in other languages belonging to democratic movements in Poland and Hungary.

2 It’s common for women and other gender minorities to be undiagnosed until late in life. Because financial and social barriers to diagnosis are so great, the Autistic community generally doesn’t distinguish between medical diagnosis and self-diagnosis with respect to the right to claim an Autistic identity.

3 It was only last year that electric shocks became illegal for use in aversion therapy on Autistic children. They were in use by at least one institution as of that date. 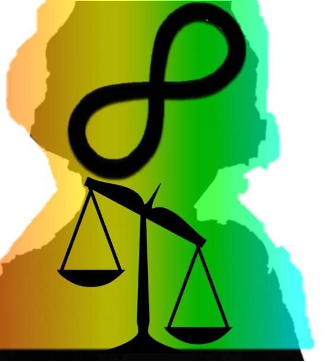 Lucia D’Angelo (she/her) is a member of a Reconciling United Methodist Church who counts among her intersecting identities both queerness and neurodivergence. She is passionate about educating her community on the intersections of the intricately interconnected social justice movements. If she could meet anyone, living or dead, she would meet want to meet Emma Lazarus.

Lucia D’Angelo (she/her) is a member of a Reconciling United Methodist Church who counts among her intersecting identities both queerness and neurodivergence. She is passionate about educating her community on the intersections of the intricately interconnected social justice movements. If she could meet anyone, living or dead, she would meet want to meet Emma Lazarus.

View all of Lucia D'Angelo's posts.